Amidst Cuts to NASA, Mars Sample Return May Finally Happen

The President’s Budget Request for NASA in 2020 would start a Mars Sample Return mission and ramp up efforts to send humans to the Moon. But it would still kick off the first year of a new decade with a half-billion dollar cut to the space agency.
read more … https://ift.tt/2TseVHM
via Planetary Society Blog https://ift.tt/QRHOCj

Using the Southwest Research Institute-led Lyman Alpha Mapping Project (LAMP) aboard NASA’s Lunar Reconnaissance Orbiter (LRO), scientists have observed water molecules moving around the dayside of the Moon. A paper published in Geophysical Research Letters describes how LAMP measurements of the sparse layer of molecules temporarily stuck to the surface helped characterize lunar hydration changes over the course of a day. Up until the last decade or so, scientists thought the Moon was arid, with any water existing mainly as pockets of ice in permanently shaded craters near the poles. More recently, scientists have identified surface water in sparse populations of molecules bound to the lunar soil, or regolith. The amount and locations vary based on the time of day. This water is more common at higher latitudes and tends to hop around as the surface heats up.
read more … https://ift.tt/2H9aP0I
via Southwest Research Institute https://www.swri.org 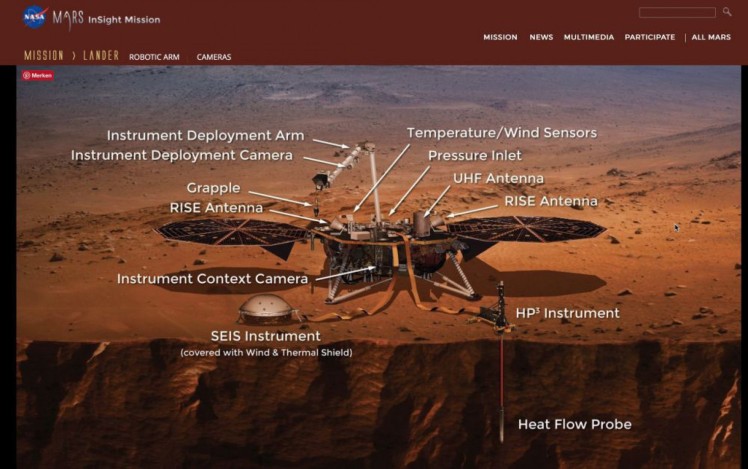 InSight will be the first probe to focus its investigations predominantly on the interior of the Red Planet. The lander – due to touch down in November – will put seismometers on the surface to feel for „Marsquakes“. These tremors should reveal how the underground rock is layered – data that can be compared with Earth to shed further light on the formation of the planets 4.6 billion years ago. „As seismic waves travel through [Mars] they pick up information along the way; as they travel through different rocks,“ explained Dr Bruce Banerdt, InSight’s principal investigator. „And all those wiggles you see on seismograms – scientists understand how to pull that information out. After we’ve gotten many, many Marsquakes from different directions, we can put together a three dimensional view of the inside of Mars.“

Logbook entry: 12 March 2019
This week the radiometer has observed three passes of Phobos in front of the Sun: Phobos eclipses. The eclipses were pronounced in the radiometer data showing an approximately 1°C dip in temperature through the roughly 30 seconds of duration of the eclipse. The cameras on InSight have also observed the small and brief dip in daylight as can be seen in the animated gif below. The radiometer data will be interpreted in terms of the thermo-physical properties of the top-most layers of the Martian soil. Interpretations of the results are expected by the time of the Lunar and Planetary Science Conference earliest, which is from 18 to 22 of March.

NASA’s InSight has its Mars plate full with deploying the lander’s seismometer and trying to figure out why its heat probe is having problems digging down. But it still had time for some sightseeing when it documented an eclipse.

NASA’s InSight lander took this series of images on Wednesday, March 6, 2019, capturing the moment when Phobos, one of Mars‘ moons, crossed in front of the Sun and darkened the ground around the lander. These images were taken by InSight’s Instrument Context Camera (ICC), located under the lander’s deck.

The spacecraft completed a successful test flight with splashdown in the Atlantic Ocean on 8 March 2019 at 08:45 EST

SpaceX’s Crew Dragon returned to Earth with a splash in the Atlantic Ocean off Florida’s eastern shore at 8:45 a.m. EST, completing an end-to-end flight test to demonstrate most of the capabilities of its crew transportation system to the International Space Station as part of NASA’s Commercial Crew Program.

At 2:32 a.m. EST, Crew Dragon undocked from the International Space Station to begin the final phase of its uncrewed Demo-1 flight test. The spacecraft is slowly maneuvering away from the orbital laboratory into an orbital track that will return it and its cargo safely to Earth.

Vice President Mike Pence and NASA Administrator Jim Bridenstine called up to the Expedition 58 crew today. Astronauts Anne McClain and David Saint-Jacques were on hand to talk about their mission success and the arrival of the first Commercial Crew vehicle, the SpaceX Crew Dragon.

This Monday, the Expedition 58 crew is taking a well-deserved break after a busy week prior wrapping up SpaceX’s inaugural flight of Crew Dragon to the International Space Station during Demonstration Mission-1, an uncrewed flight test. The vehicle departed station for a splashdown off the Florida Space Coast at 8:45 a.m. EST Friday, bringing NASA even closer to sending astronauts into space from American soil.

Before Launch and Spacewalks, Science Reigns Supreme Aboard Orbiting Lab

As the Soyuz MS-12 that will carry the Expedition 59 crew to the International Space Station Thursday was erected on the launch pad at the Baikonur Cosmodrome in Kazakhstan, Expedition 58 resumed research and routine maintenance after their off-duty day Monday.

via NASA’s Photojournal: Images taken by the Juno Mission https://ift.tt/2mlXY1E

Hayabusa2 Scores a Bulls-eye on Touchdown, More Explodey Fun on the Horizon

The mission is also gearing up for a possible second sample collection.

The subtle color difference between Uranus and Neptune

The color of Uranus and Neptune is similar, but not identical. Uranus appears greener and Neptune bluer.

NASA declared the record-setting rover’s mission complete on Feb. 13, 2019, but the final image from the rover has just been processed.

As of mission end on 30 October 2018, Kepler had detected 1,815 planets or planet candidates in multi-planet systems. All 726 such systems are drawn here.

Two sources familiar with the thinking of Vice President Mike Pence–who leads US space policy–have said he is frustrated with the slow pace of the nation’s efforts to send humans to the Moon. In particular, he is growing tired of delays with NASA’s Space Launch System rocket, which was originally due to launch in 2017 and is now likely delayed until 2021 at the earliest. ..

ESA lays down the law

ESA and the European Centre for Space Law will soon hold a workshop all about space debris – including debris mitigation, legislation, standards and tools – from 19 to 21 March 2019

New ‘cubesat’ technology and falling launch costs mean that businesses, universities and other organisations are increasingly able to launch their own small satellites. Now ESA is offering facilities and know-how to help them fly.

Is SLS Going To Be The Biggest Rocket – Evah?

About That „Gateway Is Not A Space Station“ Thing

WRT the whole „Gateway is not a space station since it is only periodically occupied“ thing. Skylab was our „first space station“ and it was always human-tended. This FGB/Node 1 configuration was human-tended for years but we called it a „i

In a striking example of multi-mission astronomy, measurements from the NASA/ESA Hubble Space Telescope and the ESA Gaia mission have been combined to improve the estimate of the mass of our home galaxy the Milky Way: 1.5 trillion solar masses.

This site uses Akismet to reduce spam. Learn how your comment data is processed.